Max was our Daughter’s puppy, he came to live with Grandpa when she became pregnant.

The first thing you need to know if you ever meet Max is he bites. 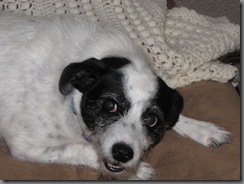 Max warning me not to even think about touching Grandma.

The second is he is incredibly fast. He is not aggressive and doesn’t attack, unless you are a rabbit or pigeon, or other dog or cat. He see’s biting as simple law enforcement. In other words you broke a “Max Rule.” Max rules are fairly simple to learn:

#1 If he is sitting next to someone, that person is not to be touched. No exceptions!

#2 No person shall act, or be perceived to act, aggressively towards another person.

#4 Do not cause Max any kind of pain.

#5 Do not attempt his cut toenails or brush his teeth without general anesthesia.

#6 No dogs, cats, pigeons, large robins, rabbits, or coyotes allowed in his yard.

Wookie (Our Cat) is exempt to all Max Laws, she doesn’t even flinch when Max acts out. Only the Coyote scares Wookie and the Coyote is afraid of Max. 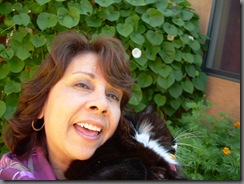 Rosie & Wookie in the Morning Glories

Max reads body language and has a large vocabulary but so far the only thing he can spell is B-A-T-H.

Max can do a large number of tricks for treats, but don’t expect a trick if you don’t actually have a treat. He has a keen sense of smell and knows if you’re faking. There are some tricks he will do without treats, all of these are part of his walks which he views as the ultimate treat. People are amazed when they see him take directions like “right, left, stop, go, leave it, sidewalk, and cross the street. Unlike other dogs I’ve had, Max is not confused by multiple word commands like “Cross the street.” Max also knows these commands in Spanish and Right & Left in Japanese. 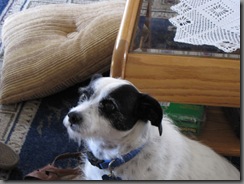 This is the infamous Jack Russell stare that Eddy used to torment Frazier.

Max is a Bully! Especially to Large Puppies, which is not cool and I’m determined to change that.

Max doesn’t do “Fetch” However he will bring you people on request. That command is “Get” combined with the persons name, ex. “Get Grandma” This command I find particularly useful!

Posted by davidoller at 6:49 AM

Labels: Max and Me

I love this. What a character! I'd like to meet him, but he might get upset with me. My grandmother used to say there was a tale that dogs could talk once upon a time, but one of them made God/a god(?) mad and so they were deprived of speech - that's why they're so expressive with everything else
- Janine